« Erg Chebbi dunes aka Merzouga dunes, popular legend tells that the site that once was a flourishing jungle was transformed into a desolated desert environment… »

Erg Chebbi dunes location is in the south-eastern part of Morocco, just 360km away from Ouarzazate and 650 km away from the famous city of Marrakech.

Legend says that God himself shaped this place. Erg Chebbi dunes popular legend orally passed through generations reports that the site that once was a flourishing jungle was transformed into a desert after the local population refused to host a poor and hungry lady during a banquet.

Legend says that wealthy families washed their hands with milk and played with couscous, while the young woman was hungry and helpless. God punished those mean families, sentencing Merzouga to become a place of extreme heat, lack of water and endless sand storms. Years passed until the entire area once filled with greenish vegetation and wild animals became the current sea of sand.

Interestingly enough, millenary rock-art in the region depicts animals such as elephants, giraffes, and other mammals usually only existing in jungle-like environments.

Whatever sort of paradise this used to be considering the legend, the fact is that Erg Chebbi Dunes are among the most beautiful places in the world…

Erg Chebbi, usually known as Dunes de Merzouga, is one of the two biggest Sahara “ergs” in Morocco. The spectacular orange hue dunes of Erg Chebbi are located in a remote region of Morocco and stretch along the Algerian border. The highest dune reaches around 300 meters.

Merzouga Dunes are actually called Erg Chebbi, so the “Merzouga Desert” is actually not an accurate name to call this place.

Merzouga, a small Moroccan village, is located in eastern Morocco, near the border with Algeria (some 50 km away). To locate Merzouga in relation to the surrounding cities, it is 350 km from Ouarzazate, 200 km from Tinghir, and 650 km from Marrakech. Or 470 km south of Fez. Our Moroccan riad is located right on the bottom of these amazing natural site. 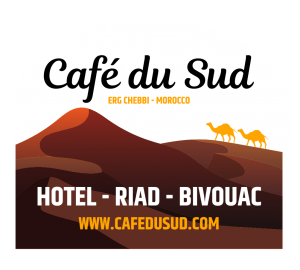